WELCOME TO THE
EARTHQUAKES - A NEW AMSTERDAM STORY

I'm so exited to announce the blog tour that will go along with my March 1st release of the latest New Amsterdam novel, Earthquakes. This one's been a long time coming, everybody's been so patient, and I want to celebrate in true demented style!

I will be giving away a necklace with a quote from Frank Sinatra's "Stranger in the Night" - "Love was only a glance away, a warm embracing dance away" - along with a $25 Amazon gift card, and a free ebook copy of Earthquakes. 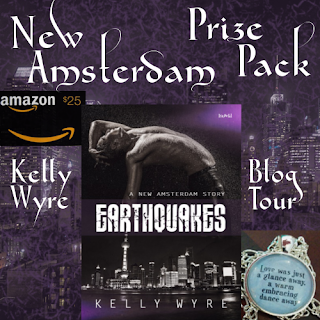 Entries for the grand prize will be tallied via Rafflecopter!

Or ENTER TO WIN by following along on the BLOG TOUR!

All kinds of people were gracious enough to have me on the tour, and along the way, I'll be giving away MORE prizes and talking about the recurring characters in New Amsterdam. And maybe some ballet. Or guns. Or whatever else tickles my fancy.

Grand prize will be drawn after the contest closes at midnight, Eastern Standard Time, on 3/18/2016.

Many thanks, much love, and good luck! 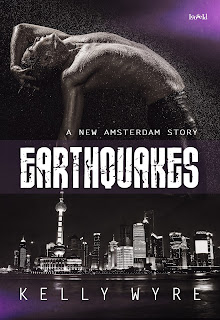 Ellis Parker is a lucky man: he escaped his persecuting family, survived his tour of duty, and met Maxwell Clark in the city of New Amsterdam. Clark showed Ellis more than the ropes: Clark helped Ellis figure out who he is – a gay submissive with a massive fixation on a beautiful, mysterious ballet dancer named Bryn Rothe. Ellis knows a Good Man when he sees one, and he wants nothing more than to score a first date with Bryn.

Little does Ellis know that Bryn has a violent past that is crawling out of shallow graves to haunt him. Even his hectic schedule and beloved stage aren’t enough to distract him. It’s impossible for Bryn to figure out how he feels about Ellis with his demons between them, but when Ellis saves Bryn not once but twice, Bryn is forced to admit that there’s something about Ellis that Bryn might not merely want but need.

Together, they journey to the scene of Bryn’s original crime – Charles Towne, South Carolina. There they will dig up secrets that might explain Bryn’s tortured life but might also be his – and Ellis’s – undoing.

Check out the World of New Amsterdam